The Night They Saved Christmas is the Film with Two Hearts

Posted on December 24, 2015 by Katelyn The Journalist 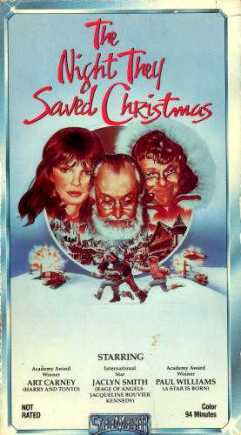 The Night They Saved Christmas (1984) could easily be dismissed as a dated 80’s Christmas TV movie, but millennials can actually get something out of this film. Now one of the many 80’s family TV movies to be lost in the nostalgic abyss, the younger generation should be exposed to its story. The heart of its plot still holds up. Well its two hearts.

In the film Michael Baldwin (Paul Le Mat) is a manager at an Oil company, and he lives with his wife Claudia (Jaclyn Smith) and three kids in Alaska. They have moved from Los Angeles, and all of them miss home. The youngest son, C.B. deals with this by putting all his energy into his belief in Santa Claus. It proves to be too much for the family though, as C.B. is getting older, and will even become angry when his older brother David dismiss the idea of there being a real Santa Claus. While the family deals with their own conflict, an even larger one is in its 11th hour.

Santa Claus’ chief elf, Ed (Paul Williams) turns up at Michael’s office at work. Ed informs Michael that the company’s dynamiting is causing damage to North Pole City, the home of Santa Claus and his elves. While the activities at “Site A” (the primary drilling area) are causing extensive damage, any blasts at the secondary site, known as “Site B”, would destroy North Pole City entirely. Michael, who does not share his sons [C.B.] undying belief in Santa Claus laughs, assuming that Ed isn’t an elf at all, and was just hired to pull off a practical joke.

Paul Williams performance as Ed doesn’t leave the audience wondering if this part of the story is real or not though, as his dedication to being a wise elf would convince anyone. A cross between Dumbledore and Mr. Miyagi, Ed speaks in a way that screams real elf. He is humble, yet sure. Paul Le Mat’s serious performance controls the scene though, as he convinces the audience that this is exactly how a manager would handle a meeting with a man claiming to be an elf. This 80’s movie doesn’t shy away from any corny plot points. At the same time they are fun for the nostalgic crowd. If you can put up with a Full House rerun you can put up with quality acting mixed with Santa’s second in command fighting for the future of North Pole City. Applause is sent to the actors for not showing discomfort, and performing with normalcy in one of the many films where a family meets Santa Claus. Made in a decade before Tim Allen would become famous for taking over the jolly guy’s job, the cast holds their own.

In the film Ed is determined, and arrives at the Baldwin’s house in a modified World War II-era snowcat, the day after after the first meeting. He wants to take Michael and his family to North Pole City. Claudia and the kids agree to go along, continuing to assume that it’s just a practical joke. A dated part of the plot, as stranger danger doesn’t seem to be a thing for this All-American 80’s family. They are not kidnapped and killed, as would happen in most present day films, but instead the family gets to meet Santa Claus (Art Carney) and Mrs. Claus (June Lockhart).

Santa shows Claudia how North Pole City is right next to “Site B,” where the company may also begin to dynamite. Santa warns them that one blast at Site B would mean the end of the city and, therefore, Christmas as they know it. He tells them that the main oil field is actually at Site A, which means Site B shouldn’t even exist.

Claudia tells Michael and his boss Sumner Murdock (Mason Adams) about what Santa said. Unfortunately Murdock believes that Claudia and the kids were given a hallucinogenic drug by Gaylord, the corrupt head of a rival oil company, to keep them dynamiting in the wrong place. Murdock orders that Site B be dynamited on Christmas Eve so they can get to the oil before Gaylord does. No one is sent to the hospital though, even though it is presumed that they have been given drugs. Another perk of the happy 80’s decade one can assume, but that shouldn’t push any millennial viewers away just yet.

The kids were eavesdropping on this meeting, so the older two, David and Marianne, decide to sneak out of the house to warn Santa. Soon after Claudia finds out, and takes off in her plane to look for them. While Claudia appears to be a homemaker, in the mid 80’s when it was becoming less common, this airplane scene gives her strength. Maybe not as much as current female leads such as Katniss Everdeen, but a film from 30+ years ago is going to have some flaws.

Meanwhile, Michael begs Murdock to postpone the dynamiting until Claudia and the kids are found. Murdock denies the request, even at the expense of his manager’s family. Michael continues to dynamite at Site A however, believing that the oil field is located there. At this point it is Christmas Eve, and the dynamite crew is out at Site B, beginning the count down.

In a better turn of events C.B. receives a call at home from a crew member informing him that a gigantic oil field has been discovered on Site A. 80’s children must have been quite astute, as a grown man shares this information with someone who hasn’t even reached a double digit birthday.

Santa and Ed visit the family at home with gifts. One of the more dated toys is a robot that helps children with their homework. The 80’s was a pre-internet decade, so the entire family is impressed. As it is the 80’s, this heartwarming family film is then made even cornier. The family watches Santa Claus fly away, and a sappy 80’s song plays over their serious faces.

While the aspect of the plot that says you always want to go home can be seen as the heart of the story, and of course holds up well past the 80’s, this film is on two beats. Pollution and destruction coming to North Pole City is the films second heart. It represents any environmentally damaging things that affect the world, or at the very least America.

Today the Keystone pipeline is the hot topic among two groups. One is the people who will benefit from its expansion financially, and the other is the group who doesn’t believe you should take a financial risk if it could have unimaginably devastating effects on the environment. The Cowboys and Indians Alliance is one of the more famous groups against the pipeline. This more rough and tough American example of the fight against pollution can’t be made into a Christmas movie the way the search for oil can, but the similarities between the two keep The Night They Saved Christmas above other dated films. Unfortunately its lack of exposure around its respective holiday has kept it in the vault. While the film screams 1984, it also screams 2015. It will probably scream every present day year for quite some time. The missing home aspect being there for families, and the pollution aspect being there for any American concerned with the environment. Wrapped inside a Christmas movie, this hard hitting topic is something that always needs attention. Somehow the 80’s found a way for it to share the spotlight with Christmas.

While the films appearance screams 80’s VHS tape recording, and some of the shots are a little too closed in, specifically at the oil company, the film was made to best quality it could have been, and isn’t anything awful to sit through. In fact, it charms audiences in a family friendly setting, without sugarcoating our world, which faces some of the issues in the film. While getting cozy at home parents are able to expose their kids to darker topics, but only with baby steps when using this Christmas movie.

Katelyn Avery is a Connecticut based writer, born in 1993. She graduated from Central Connecticut State University in May 2016. As someone who has enjoyed writing since childhood Katelyn is very excited to see where her passion will take her.
View all posts by Katelyn The Journalist →
This entry was posted in Uncategorized and tagged 1980's, 1984, Art Carney, Christmas, Jaclyn Smith, June Lockhart, Katelyn Avery, Katelyn The Journalist, Mason Adams, Paul Le Mat, Paul Williams, The Night They Saved Christmas. Bookmark the permalink.