There’s Something in the Soup

Posted on June 2, 2016 by Katelyn The Journalist 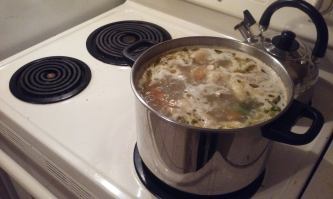 In college (Central Connecticut State University) I was confined to canned soup, and the hope for a 4 for $5 sale at the Stop & Shop on the Newington and New Britain border. Homemade soup wasn’t an option while living the Vance residence hall life, even if homemade things are cheaper. It was something I accepted though, and would eventually become well known for my different breakfast choice.

My residence hall had ovens, but it didn’t have burners, and we weren’t allowed to have hot plates. Even if we had been able to use them I didn’t have a personal fridge to store things in, and we all know your entire floor raids the communal fridge. With soup cup* in hand I often made chicken or turkey noodle soup, among closely related others. Sometimes it was in my works break room, my [Vance] floors kitchen, or the basement kitchen as the microwave constantly had an out of order sign in front of it. Either way, soup got me through breakfast in one of the cheapest and easiest ways possible for a college student.

My soup obsession started when I received opening shifts at the STC (Marcus White Computer Lab). As a transfer student I spent two years at CCSU, and a year and a half of them were spent working inside that wonderful lab. I actually enjoyed opening as mornings were relatively quiet, the only bad side is that the dining hall didn’t open until after I started working. I wasn’t the biggest fan of dining hall breakfast to begin with though. The staff did their best, and bacon days were my favorite, but my idea of a traditional breakfast is pizza bagels, and their’s was omelet’s and cereal. The clash sent me to buy cereal bars for the first semester of Saturday opening shifts at the STC. I wanted to liven things up for the next semester though, and that’s when I received a free soup cup at a club leadership training workshop. My days in a breakfast rut were over.

Throughout the year I would continue my soup breakfast routine, especially when I had three opening shifts. I became “famous” to other coworkers, and eventually the boss, for my unconventional morning meal. During one Saturday morning I spent a good amount of time googling “soup for breakfast,” explaining to a coworker how awesome soup for breakfast was, and that the internet supported my decision.

It was always a shock to some of my fellow openers if I had Dunkin’ Donuts or Subway (The meal…I know…odd) instead of my usual. It’s a funny identity to have, “Soup girl,” or “Coworker who loves soup,” something like that, my former coworkers and I never really had a title for my workplace role, but I was always happy to be known for my breakfast.

*The hyperlink does not show the soup cups that I use, it is just an example of what a soup cup is.

Katelyn Avery is a Connecticut based writer, born in 1993. She graduated from Central Connecticut State University in May 2016. As someone who has enjoyed writing since childhood Katelyn is very excited to see where her passion will take her.
View all posts by Katelyn The Journalist →
This entry was posted in Uncategorized and tagged CCSU, Central Connecticut State University, Chicken noodle soup, College, College food, Dorm, Dorm life, Groceries, Katelyn Avery, Katelyn The Journalist, New Britain, New Britain CT, Newington, Newington CT, Res life, Residence hall, Soup, Undergrad, Undergraduate, University, Vance. Bookmark the permalink.

2 Responses to There’s Something in the Soup